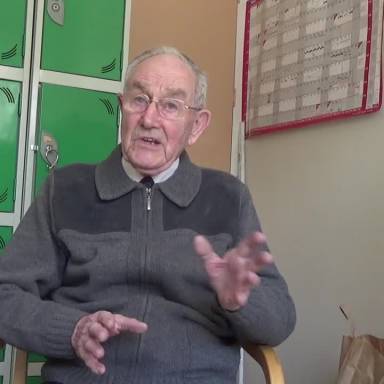 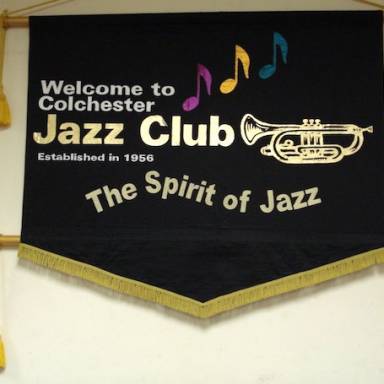 Colchester Jazz Club
Back to Interviews
Next
Previous

Interviewer: So we can get this in context, I know you’re 88. I don’t know your names.

Interviewer 1: And you are?

Interviewer 1: Iris and Irene, right so I’m just trying to do some mental arithmetic. What period would we have been talking about when you would have been going out for the evening to dances?

Irene: Well, probably from about 16.

Interviewer 1: From about the age of 16.

Interviewer 2: The 40’s and 50’s. OK, Nice. So what would you say your average night out looked like. What would you guys do?

Irene: Well I thoroughly enjoyed it, they were mostly dances.

Irene: That I went to, with friends and obviously pictures sometimes you know - the cinema but mostly anywhere where there was dancing. I loved the dancing places.

Interviewer 2: What was your favourite music to dance to?

Irene: Favourite music to dance to, well yeah the Quickstep was the, yeah but whatever they were I danced to them, the slowest ones, the quick ones. I loved it, I loved the dancing.

Interviewer 1: Was there a particular sort of clothing that you would go to a dance in or would it just be a sort of – the same as you would wear every day of the week?

Irene: Well I suppose some of it would’ve been that because some of the nights were just weeknights, some of the dances we went were frequent ones.

Iris: But even the waltz was slow but it was calming.

Irene: I loved the dancing, obviously I don’t do much of it now as I’d like to.

Irene: I wouldn’t have the strength now to carry on with what I was doing then. I was never still. [laughs] As soon as that music was on, I was there.

Interviewer 1: And this would have been couples dancing presumably?

Irene: Well yeah it would have been couples dancing but also there was times when you was all dancing, you know it was like when, oh what do ya call it? I don’t know what you would call it but there was music that was quick and very loud and you’d get up and you’d all be doing it sort of thing. I loved all that.

Interviewer 1: Because one of the things we were talking about earlier was the reluctance of men to get involved in dancing. Causes a bit more of a problem.

Irene: Well no the men, the men would do the Waltz or you know that sort of dancing, when I was going the men would do the waltz or the quickstep or something like that but they weren’t like the women – if they played a record or something you know, it was very fast, then it was mostly the girls and the women that were up doing it, there weren’t many men doing it then but I enjoyed it whatever it was.

Interviewer 2: Did you go and see big bands play quite often?

Interviewer 2: Very nice, very nice. Did you go out to a lot of like gigs and music events?

Irene: I can’t remember much about gigs and things like that but I know I did a lot of dancing; was out a lot of time dancing, and I loved it – yeah.

Iris: Yeah, there was always organised.

Irene: Yes. Some I suppose were…

Interviewer 1: What, clubs or?

Irene: Yeah there were clubs around, no it was very interesting. Trouble is the older you get the less you can think straight [laughs]. If I’d have known this was coming I’d have worked it all out before. I could’ve told you probably a lot more. Tonight I’ll be thinking this n’ that - ‘I didn’t tell him that’. That’s because I can’t remember at the moment.

Interviewer 2: Well we’ll certainly come back and have a wider chat; it’d be good to hear more about the nights you guys went on.

Irene: Well I’ll sort that out and think about it cause you do forget things as you get older and my age now, I’m terrible [laughs], I feel like a little girl sometimes [laughs]. But I’m pleased I have reached the age I have you know. When I see all these people, you know, these things they wheel and push about, they can’t walk, they have to sit in something. I feel so sorry for these people, because a lot of them are still young and I think that they’ve not had much life.

Iris: It’s a shame for them innit?

Interviewer 1: That in a way has come as quite a surprise to me because I kind of expected, I suppose because of my generation, people kind of got into whatever music they got in to, and I’ve completely lost track of what’s going Pop wise today but somehow you guys have managed to keep on top of it – that’s great.

Irene: I do get forgetful now, I get annoyed with myself for being like that. I just can’t help it because of my age.

Interviewer 1: But you do listen to all types of music, all the different generations of music?

Irene: I do yeah.

Iris: There’s a lot to remember too in’t there?

Irene: Yeah and I do love listening to music because it’s fast, you know I just feel happy when I’m doing that sort of thing you know? Oh yeah, where ever I am, if I’m indoors or cooking a meal or something, [laughs] you know – wireless is on – music, I still dance. No I love listening to it. As I say as you get to a certain age you obviously can’t fit too much in. I’m always frightened if I’m out and I start messing about that I might fall or something and hurt myself and I won’t be able to do it anymore, so I have to be very careful but I still like it, I still enjoy it.

Interviewer 1: Presumably when you were going out in your youth this was still this sort of rationing period was it?

Interviewer: Did you get clothes easily enough and stuff like that?

Interviewer 1: Was there a problem with that?

Irene: Oh no, there was no problem. I’ve still got about four wardrobes [laughs] full of clothes. No, no problem with clothes. I always liked nice clothes, I was always ready to buy something different. What I’ve got on now I’ve had quite a long while, I’ve still got things in me wardrobe and what pleases me is if someone says ‘Oh I like your dress’ and I think to myself ’Oh, good’ cause I’ve had it sometime but it still looks nice on, if you know what I mean.

Interviewer 1: So clothes weren’t rationed or anything like that, it was just sort of food and stuff was it that was still the problem?

Irene: If I see something nice, I like to buy. What I’ve got on now I’ve had for a few years but they still fit, so…

Irene: I still wear them.

Irene: I’ve also got better ones that if I’m going to a wedding or something like that, something special, and I’ve got other things to wear. I’ve always been keen on clothes, and my age, now what am I? – 88.

Irene: Oh I wish I was, 88 now so I have to sort of ease up a little bit now, obviously.

Interviewer 2: That’s great. Ladies thank you so much, that’s fantastic.