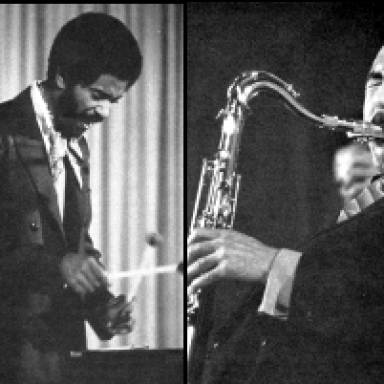 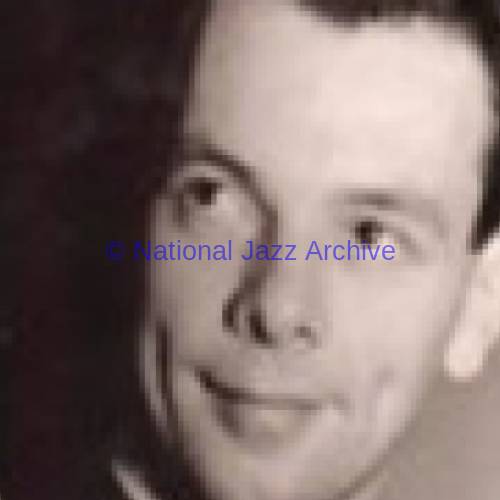 The Gabriel from Scotland

Biography of Bobby Pratt a Scottish lead trumpeter whose high note work with Ted Heath gave the famous brass section much of it's distinction. Includes tributes from fellow musicians such as Freddy Clayton and from his wife Tina Pratt. 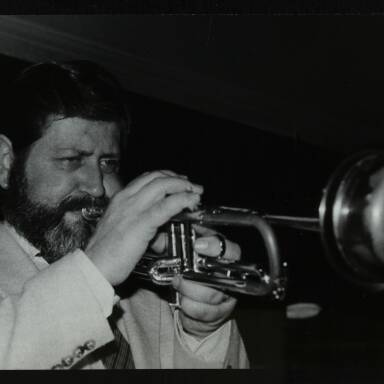 Bobby Shew
Back to Interviews
Next
Previous

Bobby Pratt was a world class lead trumpeter whose high note work with Ted Heath gave the famous brass section much of its distinction. He was also one of Britain's busiest session-men who worked with many of the world's top jazz and pop stars in the record and TV Studios.

Having taken up the trumpet at an early age Bobby became a professional musician at the age of sixteen. He worked with the pianist Archie Alexander in Aberdeen in 1945, then served in the Royal Corps of Signals, bringing much of his time in the army playing with the Skyliners Army Band at Catterick Camp in Yorkshire. The billing was: Royal Signals Dance Orchestra, Scarborough, R. Pratt Trumpet, Bandleader, Piano etc.

There is a large poster from that period advertising the Skyliners as being led by 'the ace-trumpeter Bob Stuart'. He was not over-keen on 'Pratt' so used his middle name a lot, much to his father's disgust.

Alan Blomerley, of Newcastle-upon-Tyne, a colleague from those days, upon seeing a mention of this in a jazz magazine many years later, wrote, "When I saw the word Skyliners I made a big effort and dug deep into a certain cupboard. There, beside a pile of 78s was "the album", never opened since my daughter got hold of it and had hysterics. In it was a photo of the Skyliners. It's certainly an early photo; I know that because the late Bobby Pratt had jumped out of bed that morning and announced that he was changing his name to Stuart—which he never did, except on the photo caption!"

Another member of the Skyliners was the trumpeter Alan Moorhouse, who later wrote, "They had a terrific musical scene at the Royal Signals—a military band and a tremendous dance band—The Skyliners. They broadcast, gigged and everything. The personnel included Eddie Blair, Ted Brennan, Alan Braden and the late Bobby Pratt. There were so many good trumpet players looking for jazz that we used to play Roy Eldridge's "Little Jazz" four times a night so that everyone could have a bash at the solo!"

Bill Le Sage: I was sent up to Scarborough to join the Royal Corps of Signals. Bobby Pratt, the trumpet player, was up there as well. Bobby was one of the greatest lead players we've ever had. He was known all over the world. In fact when he arrived in LA with the Heath Band, he was met at the airport by a crowd of the top session players in the States, who feted him. They thought he was the guv'nor. It worried him, though, all the pressure. It's tough up there at the top.

Anyway, when I arrived in Scarborough I went to audition for the Big Band they had up there. I didn't fancy my chances much, because my reading was pretty dreadful, being a self-taught idiot, and there were four other piano players who were quite good readers. I was having a cup of tea in the Naffi afterwards, and Bobby Pratt came in. 'I won't get this' I told him. 'Those others can read' 'Yes' he said 'Unfortunately they can't play. I've told the Sergeant to get you in!' So I got that gig, two nights a week, and, as well, we went out with a small group, with Les Simons. There were so many gigs up there we never had a night off. That's as well as all the Army training in the day. Extract from Jazz Piano UK.

After his two years of National Service Bobby joined the Ken Mackintosh band, at the time resident at the Astoria Ballroom, Nottingham, and remained there from March 1948 until April 1949.

The Astoria was a well-known visiting venue for all of the great big bands of that period, and Bobby was regularly seen and heard by most of the top musicians and bandleaders of his day. It was a surprise to no-one that, when Kenny Baker left the prestigious Ted Heath band, Bobby was nominated for the job of lead trumpet.

Here's what Heath trumpeter Stan Roderick had to say at the time. "I stayed with Ted for about six years. But as people started to leave, it somehow lost the original magic; I think the band changed character, really. Kenny Baker left after three or four years, Norman Stenfalt left, and I missed both of them. Mind you, newer players came in, like Bobby Pratt, who I recommended for the job. First of all, Ted wasn't too keen; saying, "Oh yes, I've heard him. He's a youngster with little experience; he plays a lot of high notes. I'm not sure." I said, "Well, Ted, I think he's the chap." We all know the rest. Dear old Bob. Who, incidentally, was a lovely boy. Apart from his tremendous high notes and powerful playing he was a big, happy character. I never heard him say a bad word about anyone."

With the Ken Mackintosh Band, Bobby played trumpet, fluegel horn, piano, drums and also sang. He used to play Body and Soul, and his version of the tune will always be remembered by everyone who heard it.

He was on a two-year contract with Ken and Ted Heath made it known that he wanted Bobby just as soon as his contract finished. He took over the lead chair from Kenny Baker with Ted Heath, and it was there that he made a worldwide name and became dubbed the Conrad Gozzo of Britain.

He also worked with the string orchestra of Frank Chacksfield and played solo, Bobby Hackett-type jazz. On every session he did he would be booked from 10-2, then 2-5, then 7-10pm and this went on day after day. He made his name as a high note man, and on every session he did it was demanded that he play at the top of his range, often taking things up an octave to get more excitement in an arrangement.

Bobby stayed with Ted Heath until November 1960. During this period he also worked in Humphrey Lyttelton's Big Band, Eddie Harvey's Big Band, with Bob Miller, and with the Ivor Kirchin band on various recordings and broadcasts. As he was under contract to Heath his name appears on the Kirchin band lineups for such dates as Big Tarp, a name conceived for him by the drummer Basil Kirchin.

Tina Pratt: When we got married in 1957, Bobby  was filming It's a Beautiful World at Shepperton Film Studios, consequently this was where we spent our honeymoon. We were married on the 22nd January 1957 and not long after Bobby was off to the States again.

Bobby as a session musician was on the 1963 soundtrack of the Bond movie From RussiaWith Love. Matt Monro was the singer. He was also on the 1964 movie soundtrack of Goldfinger, and the Doctor No soundtrack, which introduced the Bond Theme in 1962.

Some of the shows he accompanied, with various orchestras, were: Steptoe and Son, The Arthur Haynes Show, The Dick Emery Show, The Dave Allen Show, Morecambe and Wise (their first six shows, one of these had the guest artist Maurice Chevalier, I was there and met him), That Was The Week That Was, David Frost, The Fabulous Shirley Bassey and Hancock's Half Hour. He recorded with Geoff Love, Matt Monro, Laurie Gold, Petula Clark, Tony Hatch, Cilla Black and Tom Jones.

Here are some of the tributes to Bobby published by fellow musicians.

Freddy Clayton: May I, on behalf of all his colleagues, pay tribute to the late Bobby Pratt, who died so tragically last week? While Bobby was working with the Ken Mackintosh band it was obvious to all that here was a player of exceptional ability.

When he took the very difficult lead trumpet position with Ted Heath it was considered
by all that Bob had developed into one of the world's best.

None of us who worked with him ever heard him say a derogatory word about a fellow musician and as a player and a man he was a credit to the profession. He will be sadly missed. Freddy Clayton

I was with the Tommy Sampson Band and we  were doing a one-night-stand at Nottingham. The resident band was the newly-formed Ken Mackintosh orchestra and as we entered the ballroom—wow!—what a sound! A six-foot young trumpeter was down the front playing "Body And Soul", and it was, of course, Bob Pratt. I am sure that his version of the tune will always be remembered by musicians, not only for his great high register work at the end, but also for the subtle jazz feel and the good notes he found in the build-up towards that last chorus.

After his stay with Ken Mack, he took over the lead chair from Kenny Baker with the legendary Ted Heath band, and it was there he made a world-wide name and was dubbed the Conrad Gozzo of Britain. What more fitting tribute can you give any lead trumpet man?

Off the stand he was a lovable big beauty; never a show of temper or a bad word about anyone. All he wanted was to make music. He was the best work-horse any bandleader could ever have-yet at the bottom of his heart all he wanted was to play Bobby Hackett-type jazz, which he proved he could do on an album with Frank Chacksfield's orchestra. Surely this deserves to become a collector's item.

He made his name as a high-note man, and every session he did he demanded that he play at the top of his range and take things up an octave to add excitement to the arrangement.

So we've had to say farewell to one of the world's finest lead trumpets. I, for one, will always be thankful that I had the privilege of being led by the Gozzo of Britain—Bobby Pratt.
Stan Reynolds

A Bobby Pratt Memorial Concert was organised by bandleader Bob Barter (with whom Bobby had been working latterly) for July 1, 1968 at the 100 Club in Oxford Street, London. It turned out to be one of the hottest days for years and with the railwaymen in the middle of a go-slow strike, the odds were stacked against a big turn-out, but a large crowd came.

There were many sincere musical tributes paid during the evening. Peter King's beautiful singing alto and the excellent Ron Matthewson's marathon stint on bass deserve special mention, along with Kenny Clare's sparkling drumming, Humphrey Lyttleton and the phenomenal Kenny Baker.

Bob Barter organised the benefit, admirably aided by Stan Reynolds. Among those present were the Humphrey Lyttelton Band, the Bob Barter Band, the Ted Heath Orchestra (past and present members-directed by Jack Parnell), the Danny Moss Quartet with Acker Bilk, the Don Rendell/Ian Carr Group, the Ronnie Ross Quintet with Art Ellefson and the Kenny Ball Jazz Band. Notes by Geoff Burdett.