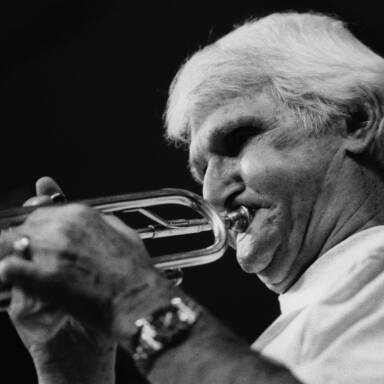 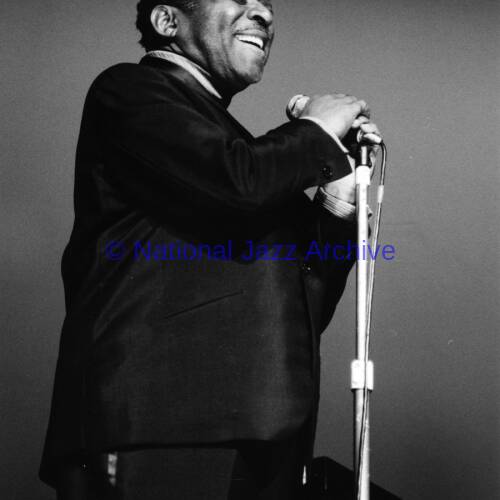 Bill ‘Count’ Basie led bands that perfected Kansas City jazz and marked the transition from the structured big band style to the musical improvisation style of bebop. Of his hard-swinging, bluesy style it is said “While New Orleans was the birthplace of jazz, America’s music grew up in Kansas City”.

Basie’s most significant period of activity started in the 1950s with a band that remained successful for three decades. The foundations for this success were being laid in the 1930s when he put together a band based around the riff style of the 1930s swing-era big bands, but with the drive and swing of a small group.

Count Basie introduced several generations of listeners to the big band sound and left an influential catalogue. He is remembered by many who worked for him as being considerate of musicians and their opinions, modest, relaxed, fun-loving, dryly witty, and always enthusiastic about his music. In his autobiography, he wrote, “I think the band can really swing when it swings easy, when it can just play along like you are cutting butter”.

My band - Past and present

Basie is interviewed in New York in 1963 by Max Barker about his band’s recent recording schedule, players he admires, and how much he is looking forward to his tour of England, which he calls his “second home”. 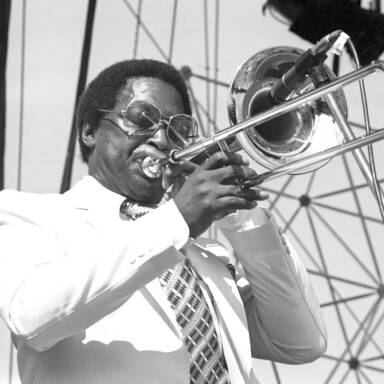 Curtis Fuller
Back to Interviews - Jazz artists
Next
Previous

It was a hot and humid Summer Saturday afternoon when we made our way from mid-town Manhattan up to the Bronx—to a place called Freedomland, known as a family entertainment centre, or the Disneyland of the East coast. Here, Count Basie and his orchestra were fulfilling a one-week engagement in the outdoor ballroom at the amusement park.

When we arrived backstage in Mr. Basie's air-conditioned dressing room, he was going over the programme notes with a radio announcer from station WCBS, who were carrying his afternoon show live from coast to coast. Most of the selections he was to play that afternoon were from his new and controversial album "This Time By Basie." We asked the Count about this album. Was it a tendency to move away from the blues formula with which his name is so closely linked. Has this been done in order to reach a bigger public ? Said Basie: "A departure from the hard sound—yes. Originally this album was going to be called `The Hits From The 50s and 60s— something more on the commercial line that might reach a different audience for us. I feel that every now and then we should do an album of standard tunes. "The band has built its reputation on original tunes and things that people really don't know until after we have recorded and played them for some time. But now we can play things people know and extend into a few extra areas.

"`April In Paris' possibly did much for us along these lines. It was my idea to record the number with organist Wild Bill Davis, whose arrangement it was. However, something happened to him on the way to the recording studio and we did it on our own. You know the story after that." We remarked that the album with Frank Sinatra has been alternately praised as an inspired get-together and condemned as a further instance of the band losing its true identity. Does he believe that his band is as effective behind Frank as it has been behind Jimmy Rushing or Joe Williams? Said Basie: "They are different types of arrangements, of course. Neil Hefti had an idea that this type of arrangement behind Sinatra was like a picture arrangement, because in the past we have been using a lot of hard sounds behind singers and Billy May's band played the hard and swinging things for Frank.

"Neil thought more colouring would be just a little more tasty. Very understandable—and to the point to me. It had a wonderful continuity. You have to listen to understand how Neil felt about these arrangements. I dig it a lot. This is how he felt and the way I like to play." Does Basie feel that the band's overall sound has changed in the last 10 years ? "This is a question hard for me to answer. There have not been too many chord-structure changes. A bit.

"I think the soloists have their own styles—which differ. Quite a few of the new men have been more on the progressive side. But basically we try to keep right in the same groove." Does he feature many head arrangements—and does an arrangement undergo much alteration at rehearsals when the band gets to work on it ? "Not too much. We usually take an arrangement down and when we are out on the road we kick it around. We sometimes change it a little after we are used to playing it a bit. But not too far away from the arranger's original idea." Which writers have been able to capture the Basie idiom most successfully and whose writing does he like to use most? "I like all the guys that write for the band. They all sort of capture the idea and it is within the band how we bring it back after we have had it a length of time. However, the original idea has to be born in mind.

"All the guys do a wonderful job of writing—Frank Wess, Quincy Jones, Frank Foster, Ernie Wilkins and, of course, Neil Hefti. And our new trumpet, man Don Rader—who you will be hearing this September in England—wrote a new number called `Pierre Point', named after our valet. We rehearsed this when we were in Japan.

"Maynard Ferguson is using about six or seven of the things Don did when he was playing for him." Of the many fine musicians who have worked with Basie over the years, are there any he has particularly enjoyed hearing? "This is simple: I have enjoyed each one of them. Even when they retire and get combinations of their own I still enjoy them.

"Lester Young, who I would like to mention, was in a class by himself. Definitely a stylist and an originator." Has Basie retained Freddie Greene I because he prefers to hear a guitar in a rhythm section or only because he happens to be an essential ingredient of the band? "Well, it is both. He is a sort of hold-together. A guy you hear, yet don't ( hear, but always know whether he is ( there or not. Not a soloist of any kind, but a lot as far as holding things together is concerned.

"If he is not in the section we miss him greatly and we feel it. For example, recently we did some tapes with a small group of original band members for radio station WNEW and Freddie could not make the session. One could literally hear the gaps in the tapes and you could almost hear Freddie there although he was not." What was Basie's reaction when he first heard the vocal transcriptions of items from the band's book by Lambert, Hendricks and Ross? Did it strike him as an important achievement ? "A very pleasant surprise, very interesting and very rhythmically done. I think the words were nice and the vocal interpretations of the solos were very good.

"Was it an important achievement? Yes. It killed me.

"I had no idea they were going to record this until after they had made the original. Then John Hendricks came to me with the idea of his getting together with Joe Williams and doing some standards, such as `Topsy', `Jumping At The Woodside' etc. But all in all, I think I like the original recordings better." How does Basie feel about the band led by Harry James and patterned to a large extent on the Basie sound? "Again, a surprise—and I know it was an honour. They didn't have to play what we played and I think the band really executed the things we did remarkably well.

"Ernie Wilkins went in there with the arrangements, and they did a great job. Harry's band is absolutely tops." Does he think jazz has benefited by the fact that the small group has come to the fore and the big band has almost disappeared from the scene? "Big bands have been away from the scene for quite a while. Clubs have become smaller and ballrooms limited.

Then came the singing era, which is still in. But now, thank goodness, some singers use the big bands on their concert tours.

"I ran a small group for about ten months, but I was not exactly happy with it, although I was fortunate enough to have excellent musicians—trumpeter Clark Terry, Buddy DeFranco, clarinet; Wardell Gray, tenor sax; drummer Gus Johnson and a great bass player, Jimmy Lewis.

"After Buddy DeFranco left us, Marshall Royal joined on alto/clarinet, and it was during this time we decided to get a big band together again.

"We came to New York to back Billy Holliday, who had just got out of hospital and was appearing at the Strand Theatre. We only had a 10-piece at that time, but later enlarged the band to play club dates, such as Birdland.

"Then Billy Eckstine was going on a concert tour and invited us to go along with him. We were scuffling—Birdland, club dates in Chicago, concerts and concert tours. And here we are now—still scuffling!" Is the band booked far ahead? "Very nice. Could be better, could be worse. We are booked into next year, but spotty. Some things still need to be worked out.

"TV has been good to us this year. We just completed tapings for The Judy Garland Shaw, to be shown next September. We also appeared on Vic Damone's opening show of The Lively Ones.

"As soon as we return from our European tour we are scheduled to appear on The Jerry Lewis Show. Basis Street East and Birdland are two New York clubs we always enjoy playing. This engagement at Freedomland is very nice. A chance to play locally and to be at home to play to all types of people." What plans are there for a vocalist replacing Joe Williams? "We are still looking around. We all got so used to Joe and we still have a lot of things in the library which were built around him. We would have to get the right guy.

"Now and again, we get a chance to back a vocalist for concerts and in clubs, but we still have not found the right one." About now, it was time for the Basie boys to take the bandstand. I asked one last question about his coming trip to England.

"That is my second home. I enjoy playing there so much and meeting all my friends. Ted Heath is a great friend of mine.

"When I startd listening to his band they really got me—and that was way back when he had that great drummer Jack Parnell playing for him. I look forward to seeing Johnny Dankworth and Humphrey Lyttelton." It was about four o'clock in the . afternoon, the temperature was 98 degrees—yet a sizeable crowd had gathered around the stand as the Basie band swung into "One Mint Julep". This is one of the featured numbers from their album "This Time By Basie," which is definitely receiving tremendous play on commercial radio stations throughout the United States.

As I sat listening to the Basie Boys, it brought to mind the quotation from New York's popular disc-jockey, William B. Williams, who said of Basie's rendering of this tune: "When you listen to this, if you don't nod your head, snap your fingers or tap your feet—you're sick." By the looks of things around me, everybody was pretty healthy at Freedomland. 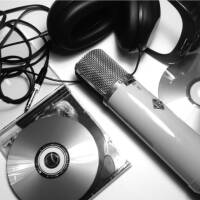