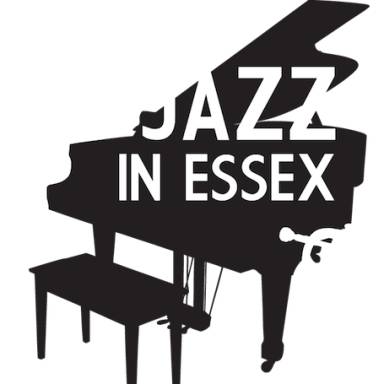 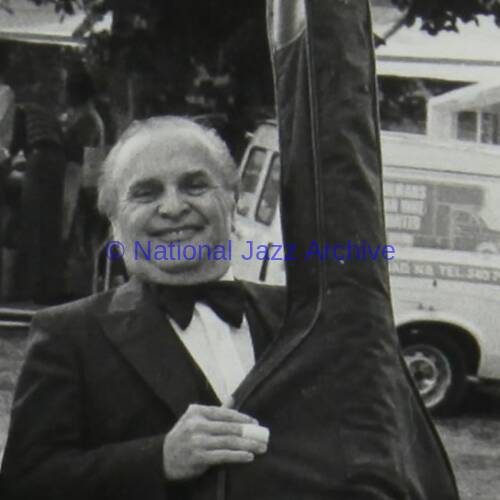 My Thrill of Playing

Jazz double-bassist Chubby Jackson talks to Les Tomkins in 1978 and again in 1979 in two separate interviews. 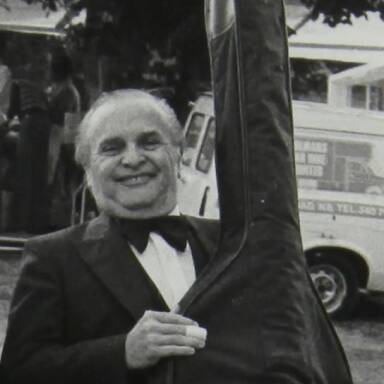 Chubby Jackson: Interview 2
Back to Interviews
Next
Previous

My thrill of playing is a big band, definitely. Although I was talking to Mark Johnson, the bass player with the Bill Evans Trio, and I told him how delightful I thought he was in his approach; I said I would really love to do about six months of absolute study with him. He looked at me and said: “Well, I would like to get something from you—the time capsule that your type of bass players have been playing.” I call it the King Kong style of bass—that “king—kong—tickada—dong—bing—bong . . .” But he’s got some finger moves that are just plain exquisite—that’s about the only way I can define it—he plays very difficult passages with such musical meaning. And I’m proud of the younger bassist, who can take the string bass, that I affectionately call the Old Lady, and make such pretty sounds out of it. Good player. There was another guy at the Nice Festival too, who was playing with Stan Getz —Mike Richmond, a young boy from Pennsylvania; he’s also a terrific player. There are a bunch of young men coming up, who are standing up for the right sounds on bass.

I’m getting older, but I’ve had a marvellous time playing. I’m to a point where I love to play, but I don’t like to have to play, if you can follow that reasoning. In any given time I enjoy it, but to work six or seven nights a week, five or six hours a night—I don’t think I have the feeling for that.

But getting back to big bands—that’s where I think I was conditioned. With Charlie Barnet, then Woody Herman, I spent consecutive years of getting with that big band machine, and propelling it. Which a lot of these younger fellows in jazz have never enjoyed; they’re into the intricacies of a smaller sound. I’ve always been, like, opening up the holes for the soloists.

How did I start? I’ll tell you—essentially, I’m a very lazy man. At that time, when I was a young boy, seeing the bass player play “boomp—boomp—boom—boom—boom”, I said: “Well, he’s not blowing an instrument, he’s not overworking—that seems to be such an easy way out.” And I chose the bass —for that purpose alone, really. But then, all of a sudden, I discovered that it was one of the hardest instruments to play, because the strings were hard to push down and you really had to exert quite a bit of brute strength to get any element of sound out of it. By this time, though, it was too late; I’d already been bitten by the bug of playing bass—so I had to really pitch in, study and get to it. I studied with a gentleman by the name of Homer Mensch; at the time he was a young man of twenty–nine, who had played already four or five sessions with the New York Philharmonic Orchestra—French bow. He was a very nice man, with a great deal of patience on my behalf—he asked me what I wanted to do with bass, and taught me that. I told him I wanted to be a jazz player, to play in a big band, and have fun. And he said: “Well, you might as well learn where the notes are, no matter what kind of style you want to play.” With a very jolly attitude, he used to play his bass, and I’d play mine, every time I went over to his home for a lesson. It made it a lot easier for me, took away my complexes of not knowing my lessons, things like that. I haven’t seen him in quite a number of years, but I do give him a great deal of credit for whatever I’ve stumbled into in my life.

There are no short cuts to anything, I don’t believe; you have to study, and all of a sudden you begin to get into circles that are up to where you have studied, and little by little you assume your position. Then, if you really have a feeling for it and you have a creative concept of the instrument and of music, then you meet with other people who are at the same level you are—and before you know it, you’re sitting in a very desirable position. I guess that’s just about what happened to me. I worked for my ambition; I had a tremendous desire to be a happy, enthusiastic, exciting–type bass player. That’s my nature, to start off with. I’ve been accused of being the cheer–leader—I guess more of that than an academician. I mean, I knew more about cheering than I knew about playing! I was very fortunate, too, because I’d always been surrounded by so many great players. At many times, I automatically played way over my head, way beyond what I ever thought I could play, because of people like Bill Harris, all the men in Woody’s Band.

Charlie Barnet really started it for me, and then I joined Woody, and, of course, the rest of that is history. Woody’s band did score heavily; there’s no doubt that I went along for the ride, and enjoyed every moment of it. And to this day I’m tremendously in the corner of Woody Herman—he’s like my daddy. I learned a lot from him not only musically, but many different ways. Seemingly, when I would be in any kind of trouble—never all that serious, of course—he’d pretty well get together and straighten me out.

I’d say he was a humanitarian; plus the fact that he’s enormously dedicated to his music. Really, I put him in the same category as a Duke Ellington, a Count Basie, a Lionel Hampton, and all these bands that had their own sounds. I mean, I know I’m leaving out quite a few bands, but you know the bands I mean, that were dedicated—Woody is one of ‘em, there’s no doubt. Stan Kenton is a dedicated man. They’ve all done their little bit for music; they’ve all contributed, in their own feelings and styles.

I’ve been very fortunate these number of years; I’m fifty–nine now, which is not old nor is it young—I’m exceedingly grateful for the nicer things that have happened to me in my life. I have really no complaints.

Yes, you could say that my bass sound was a key factor in Woody’s formula—one that has carried on. I love to hear people say that to me. I’m a little too old now to get into an ego bag; I went through that many years ago, but I do appreciate some kind of identification or recognition. I do feel like I’m a very simple guy in a lot of ways, but different people I’ve met through my travels have been very kind to me.

I believe that most of the enthusiasm and the fire that I had going was given to me by Davey Tough. Because we used to sit in the bus and discuss rhythms and music—and little excursions in rhythm. which were the early motivation of what they now call the free, avant garde music, you know. We would discuss all those little possibilities. He used to call me Snuggy—that was another nickname; he would suggest what level of the instrument I should play.

If somebody was playing up high, I should play down real low and walk up to him, or vice versa—little ideas of the area of the bass to play when the huge ensemble would come in. These were things that maybe would have occurred to me, but really didn’t until he brought it out. He was a great teacher. Like, he couldn’t play a two–bar dishonest phrase; he wasn’t a soloist, but he had such a magnificent feeling for momentum—and it was for real. Yeah, he was the ideal big band drummer. We’d sit by the hour and just discuss all different kinds of non–metronomical patterns.

He didn’t believe in that “tick–tock–tick–tock–tick–tock”; he felt that the human should never get into that. At that time, the majority of bandleaders were labouring under the belief that if I beat it off  “one–two–three–four”, that’s where it should end. And that’s really not the human sound; as I’m talking to you, I can feel a . .a word . . . let’s see if I can find a gesticulation of sound—it’s high, it’s low, then it slows down a bit, perhaps, then a little faster. That has a way of getting into your ear, rather than if I picked one level and just talked on that—that gets terribly monotonous. Which is what Davey used to say to me: if you just keep that “ding–ding–ding–ding” going all the time, after a while it loses somewhere along the line. A great many bandleaders, a great many drummers and bass players, to this day, feel that . . . the thing is losing time, or it’s gaining time—oh, we just dropped there—not even thinking that the person who is doing it is a human being, and he may feel at that moment that the thing should just get a little lazy and drop down a bit, or it should get more excited and go a little bit. I believe in that. That’s one thing that Davey drummed into me—I didn’t mean that as a pun—
non–metronomical time.

That Fortieth Anniversary Concert at Carnegie Hall was a very exciting thing—it really was. The old men came back and burned and cooked and romped and stomped—it was really unbelievable. Well, you’ve probably heard the record—it was for real.

You know, they have baseball in the States, and every year they have the all–star old–timers’ game; they would cheer a great like Willie Mays, for example, who would get up and just maybe strike out or pop out. But this all–star, old–timer thing—we were there for real. We were playing these tunes, cooking like mad, and we hadn’t seen each other on the bandstand, anyway—for twenty–five years. It fell into place immediately; which brings out a belief of truth—that’s where we were, and when we got back together, there was not the slightest indication of a struggle.

Which usually there can be, because this one is a little older, and can’t quite run the hundred–yard dash like they used to. But with certain musicians I know, that are older—they can run that dash.