Thanks to generous donations, the Archive now has a full set of the Soho Jazz Festival posters, many of which were designed by the iconic Scottish artist Eduardo Paolozzi. They are superb works of art in themselves, as well as a fine reminder of this important festival.

The posters were commissioned by Peter Boizot, a friend of Paolozzi, and the founder of Pizza Express. Boizot began the festival, which initially ran from 1986 to 2002.  Some of the posters that were gifts to the National Jazz Archive came from Boizot’s personal collection.

The other designer featured on the posters is Enzo Apicella, who worked with Peter Boizot to develop the iconic 1960s Pizza Express branding.

Eduardo Paolozzi is known for his graphic and sculpture works and is widely viewed as a Pop Art pioneer, but this doesn’t do full justice to the breadth of his accomplishments.  A few examples that may be familiar include the mosaic patterned walls at Tottenham Court Road underground station in London, the monumental bronze statue Newton after Blake, in the British Library Piazza, and the cover of Paul McCartney and Wings' 1973 album, Red Rose Speedway. 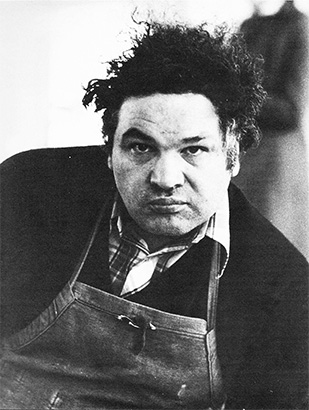 Born in Leith, Scotland, the eldest son of Italian immigrants, Eduardo was interned (along with most Italian men in Britain) in 1940 when Italy declared war. During his three-month internment his father, grandfather and uncle, were among 446 Italians who drowned when the ship carrying them to Canada was sunk by a German U-boat.

Paolozzi studied at the Edinburgh College of Art and at Saint Martin's School of Art (now Central Saint Martins Collage of Art and Design), and The Slade (now UCL Slade School of Fine Art), in London. He worked in Paris from 1947 to 1949 and became personally acquainted with internationally renowned artists such as Giacometti, Arp, Brâncuși, Braque and Léger, all of whom influenced his work.

After Paris, Paolozzi moved back to London and opened a studio in Chelsea.  Together with artist and photographer Nigel Henderson he founded a design company, Hammer Prints Limited, which produced wallpapers, textiles and ceramics.

Working at the the Central School of Art and Design, Paolozzi’s evening course in textile design attracted the Trinidadian graphics student Althea McNish. Paolozzi was instrumental in encouraging McNish towards printed textiles as her area of study at the Royal Collage of Art, after which she went on to become one of the first British designers of African heritage to earn an international reputation in textile design.

Paolozzi came to public attention in the 1950s with his striking screen-prints and primitive art brut sculptures. His seminal 1947 collage: I was a Rich Man's Plaything, is considered a torchbearer for Pop Art and the first to reference the word 'Pop'. While working in a wide range of media over his career, he became more closely associated with sculpture. He always described his art as ‘surrealist’ in nature.

During the 1960’s Paolozzi explored and extended the possibilities of silkscreen.  It was against this background that he was commissioned to produce the posters for the Soho Jazz Festival.

The original posters are held in state-of-the-art archival conditions at the National Jazz Archive's satellite collection at Birmingham City University (BCU) where they can be viewed by appointment.

These poster images and the photograph of Eduardo Palolozzi are published on our digital media by kind permission of the Paolozzi Foundation.

Although probably best known as the founder of Pizza Express, Peter Boizot was also a politician, a philanthropist and an art collector. In 1965 Boizot opened his first restaurant in Wardour Street, within the Soho district of London. Here he served genuine pizzas, which up until then had been unavailable in London.

An avid jazz fan, Boizot opened his first Pizza Express jazz club in the basement of his Dean Street branch in Soho in 1969 and went on to launch many more across the UK. The clubs have showcased many standout artists including Norah Jones, Diana Krall, Amy Winehouse and Jamie Cullum.

Pizza Express continues to be an important part of the UK live music scene.