The only really global jazz magazine 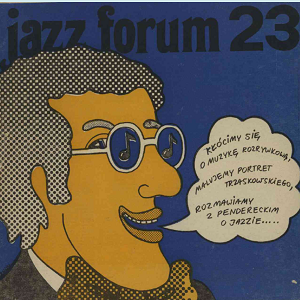 Here’s a trivia quiz question. Where was the only genuinely global jazz magazine published? New York? London? Try again. Incredible as it might seem the answer is – Warsaw.

Jazz Forum, based there, was the magazine of the International Jazz Federation, set up by an enterprising Polish bass player, Jan Byrczek. In its heyday in the late 1970s Jazz Forum appeared in Polish, English and German editions, had active correspondents and contributors on almost every continent, and was distributed in 103 countries.

Why Warsaw? Jazz had remarkable prominence in Poland from the 1960s when JF started. Stalin hated jazz but, after his death in 1953, the previously tiny Polish jazz movement came out of the secret cellar clubs and soon found a huge youth audience. Jazz was a lively art that allowed an escape from dull reality in communist Poland.

The authorities tolerated it because it kept young people happy, and they more than tolerated Jazz Forum – and didn’t interfere with it editorially – because its international editions brought in much-needed hard currency from the west. JF’s head office in Warsaw became a busy meeting place, and a familiar port of call for American jazz stars.

I found a copy of the English edition of JF while on holiday in Germany in 1972 (at that time the short-lived German edition had not yet started). Fascinated by the range of its international coverage, I soon started writing for the magazine and carried on doing so until the international English edition closed two years after the communist regime collapsed in 1990.

The economics of Jazz Forum, well-tailored to the old regime, were transformed with capitalism’s arrival. In the 1970s and 80s a main problem had been getting an adequate supply of paper for each issue (which was an indication of how much official favour the magazine was in). After 1990, new marketing and distribution issues, and all the other trappings of international capitalist commerce, posed unfamiliar and eventually insuperable problems. Finally, only the Polish edition survived. But it still does, thriving under its long-time general editor Paweł Brodowski. 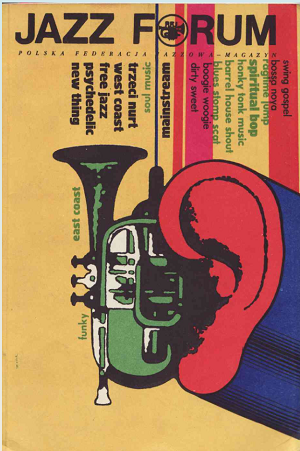 Unlike perhaps any other specialist jazz magazine that has ever existed, Jazz Forum paid proper journalists’ rates – but in non-transferable Polish currency. In the years when I wrote for JF I had a bank account in Warsaw, set up by the magazine so that my earnings from writing for it could be kept safely for me there. Eventually they paid for two trips to Warsaw.

Among the US stars who stopped by at the magazine offices during one of my visits was Mercer Ellington, a gentle, friendly person, and my wife Ann and I met a lot of local jazz musicians, many of truly world-class standard.

In communist times, Polish jazz musicians were privileged compared with other members of the Polish population. Most could travel abroad to play (because, again, they brought in hard currency from their earnings) but they had to leave their families back at home. There were opportunities for them to record in Warsaw on the state-run Polskie Nagrania record label, and I still have copies of some of those albums. Several are now international classics, reissued on CD.

But it is somewhat remarkable that great music came out of those conditions. There was a kind of queuing system to make recordings on Polskie Nagrania, which authorised a limited number of recording sessions and decided which albums would be issued. Nevertheless, the best Polish musicians often had chances to record abroad. Alto saxophonist Zbigniew Namyslowski’ recorded in Britain for Decca with his quartet when he toured the country in the early 1960s.

I have copies of virtually every issue of the English edition of Jazz Forum and will always treasure them. Leafing through them is a reminder that, from the last quarter of the twentieth century at least, jazz really had become a thoroughly international music, with fine instrumentalists emerging on almost every continent.

It is easy still to think of jazz as American music with a scatter of foreign musicians learning the musical language and trying to copy as well as possible what the US jazz stars did on record. My long involvement with Jazz Forum helped to teach me that the music is far more than that.

Having found recordings by musicians whom I read about in the magazine, or eventually heard live, I learned that many different countries add their own strong, rich flavours to the jazz gumbo. For example, Polish jazz, like Swedish jazz, was much influenced by the folk traditions of the country. Throughout central and Eastern Europe, avant-garde traditions in art (often with a notably subversive edge) also fed into jazz styles. Jazz in Turkey drew on complex rhythms natural in the traditional music of the country. South African jazz often reflected the sounds of townships and churches.

Paweł Brodowski was surprised when I told him many years ago that, if it had not been for Jazz Forum, many jazz musicians from all corners of Europe – but especially from central and eastern Europe – would have received little publicity in the English language jazz press. We still need to acknowledge fully just how thoroughly international the language of jazz, in its many different dialects, has become.

Beyond all that, I am eternally grateful to Jazz Forum for giving me the chance to experience what a vast jazz family that crosses all national (and political) boundaries really should be.