A new patron for the archive

We are delighted to welcome Val Wilmer as a Patron of the National Jazz Archive. Val occupies a very special position in our cultural landscape, both as a writer and a photographer.

Val’s writing career began at the age of 17. Her first article, about Jesse Fuller, appeared in Jazz Journal in May 1957.

Reflecting on how this piece originated, Val says: “I was an inveterate letter writer, that’s how the break with Jesse Fuller came about, me writing to him out of the blue. Woe betide any American musician who was foolish enough to have a contact address published somewhere – I’d find it and fire off a letter. The amazing thing was really, I mean really, that so many would reply! These great musicians and characters from a black culture on the other side of the world writing back to this young suburban white girl in England.”

Val has gone on to interview hundreds of musicians. Some stand-out examples include Thelonious Monk, Joe Harriott and Ornette Coleman. Her extensive writings include books, reviews, criticism and essays. Val has contributed to a vast array of publications, such as Melody Maker, DownBeat (she was its UK correspondent, 1966–70), Jazz Journal, Mojo, The Wire and Jazzwise, and regularly contributes obituaries of musicians to the Guardian.

Val’s work has been cited and used in research for many books, articles and films, including several biographies of major musicians.

Underlying Val’s work is a keen understanding of the disparity between male and female music writers. Her writings are notable for revealing and giving a voice to the inequalities faced by black artists and women, often using their own words. She has made an invaluable contribution to an important transatlantic, multicultural and multiracial dialogue.

Val’s first book Jazz People (1970) has been referred to as one of the three or four finest books ever written on jazz.

In her autobiography, Mama Said There'd Be Days Like This: My Life in the Jazz World (Women's Press, 1989), Val details her development as an artist/journalist, and recounts her coming out as a lesbian in a largely heterosexist musical milieu.

As Serious as Your Life (1977), another classic of jazz writing, documents the new black US jazz of the ‘60’s and ‘70’s. It too addresses the sexual politics and women’s experiences. 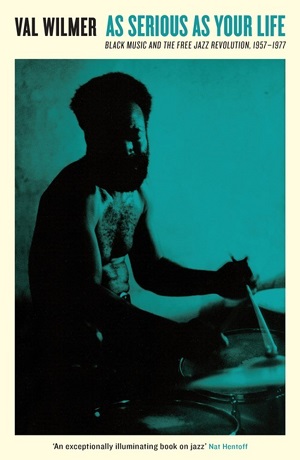 Val has over many years written biographical articles on black British musicians from the 1940s and 1950s. She was a member of the advisory board for The New Grove Dictionary of Jazz (2nd edition) and authored 63 entries. She has written more than 35 articles for the Oxford Dictionary of National Biography. The British Library Sound Archive contains 35 of her interviews with black British musicians and women musicians in its Oral History of Jazz in Britain.

Val’s career as a photographer has been of equal importance. She has taken noted photographs of artists such as Langston Hughes, Louis Armstrong, John Coltrane and Duke Ellington. Val authored the photograph-led The Face of Black Music (1976), which like Jazz People is considered a canonical and influential text in music criticism.

Val’s photographs were exhibited at the Victoria and Albert Museum in the 1973 exhibition Jazz Seen: The Face of Black Music, and form part of the V&A’s photographic collection. Her photographs are also held in the National Portrait Gallery collection and the collections ofMusée d’Art Moderne (Paris), Fotografiska Museet (Stockholm), Smithsonian Institute (Washington DC) and the Schomburg Centre for Research in Black Culture (New York Public Library).

Val has also written extensively about photography and has interviewed many practitioners, such as Eve Arnold. In 1983, together with Maggie Murray, she founded Format, the first all-women photographers’ agency in Britain.

The National Jazz Archive is truly honoured that a figure of such importance has agreed to lend support by adding her name to our list of illustrious patrons.

Find out about our other patrons.

Image used on the cover page of 'As Serious as your Life' from a photograph copyright ©Val Wilmer.

« Documentary team films at the archive